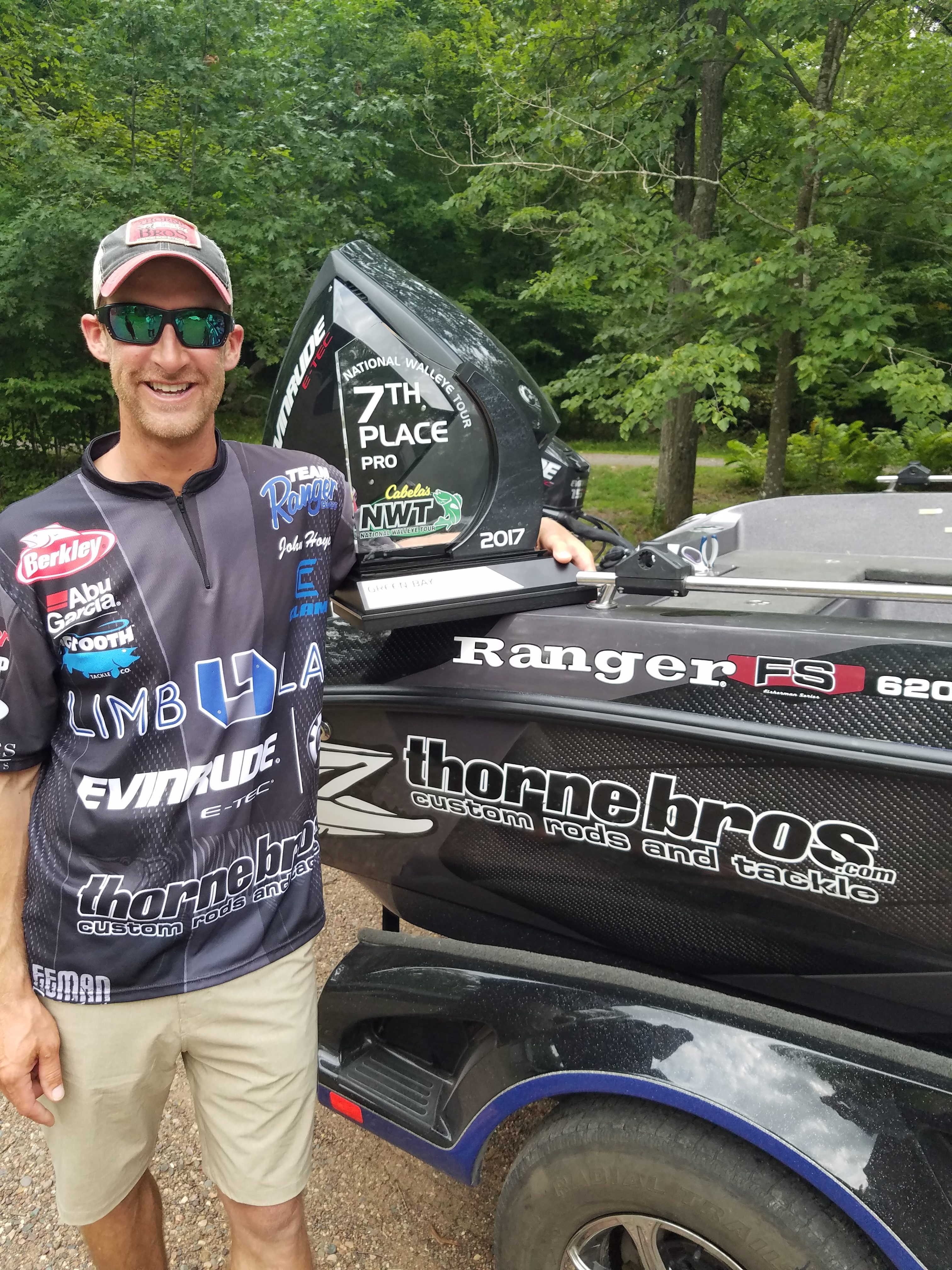 Anytime I see Green Bay on the schedule , I get Butterflies in my stomach. At first those feelings were anxiousness knowing how many absolute Hammers fish those tourneys. There has been millions and millions of dollars won in Walleye tournaments  on the Bay of Green Bay.

This time I had a very thorough plan, I was going to cast , cast, and cast some more until I figured out the areas that held tourney caliber fish.

The first afternoon I arrived at the exit same time as my partner Bill Shimota. We decided to head out together in his boat as a bonus evening of pre fish. I clipped a Shiver Minnow on my line, and basically didn’t take it off for the next 9 days. We ended up searching some deep rock humps and caught 8 or 9 walleyes in about 5 hours of fishing. It was a start.

As Practice went on I had the Great Lakes excitement every morning I woke up. Going on 6 hours of sleep each night, it really says something about how fun the adventure is for me on this huge body of water.  I felt before this tourney I was pretty good at casting a glide bait, like a Johnny Darter, Shiver Minnow, or Jig Rap.  These 7 days of practice really brought me to the next level, of depth control and understanding  exactly how to work the bait to trigger the big bites I needed.

About half way through my 7 day Practice, I remember having a huge confidence boost. I watched as a number of my Walleye Tournament Idols tried their luck at casting structure.  Guys that have won major money trolling for Walleyes on the Great Lakes.  I don’t want to say they looked uncomfortable, but I didn’t see a lot of people catching the fish that were present on a lot of those spots . I realized I had been pin pointing productive casts on structure for years Muskie fishing.  The boat control being a key thing, controlling the drift, lining up the sweet spots, reading the side imaging, etc.  I was getting better and better every spot I checked .

When Practice was complete, we had a team meeting on the way to the rules. I took the liberty to look up every Green Bay Walleye tournament results available. The consensus was clear, if you had a 30lb. bag each day you would be in the top ten.  This was important information in the No-Cull tournament format. We came up with a simple plan to average 6 lbs. per fish. If you kept a 7 lber, you could keep a 5 lber.  If you kept a 8 lber, you could keep two 5 lbers.

I was very excited to get Day 1 started, mostly because I got to go cast for Walleyes again on Green Bay for the day !

I was paired with an older gentleman as a Co-Angler who, told me that he had never casted for Walleyes before. Not an ideal scenario, but I had plans on whacking them so, as long as he could net, we would be fine ! After a quick run, I started casting to what I knew was going to be a busy point. sure enough there was probably 8 boats on the spot, spread out casting and trolling. I wanted to pick off a couple big ones before I headed to my secondary secret spots that I assumed I would have to myself.

It was overcast and kind of windy, perfect Walleye weather. The fish were on fire right off the bat, so much that I actually wasn’t even telling my Co-Angler that I was hooked up, until the fish was close to the boat. I didn’t want to cut into his fishing time waiting with the net, so I told him to keep casting while I tired out the fish.

I ended up fishing that point quite a bit on Day one, I was catching quality fish upto 8 lbs. and was seeing a number of nice ones caught around me also. It was a slow day for my Co-Angler, which was to be understood . It takes a lot of practice to get the program down, keeping your bait off the mossy bottom, but staying in the strike zone. I had room for one more fish in the box around 1pm, when my Partner set the hook. I could feel his excitement as he fought the fish to the boat. That fish ended up being another 4.5 lber. Not the fish I was looking for , but a great confidence booster since it was only his second fish of the day.

I told him, he was doing great, and that I was saving a spot in the live well for his big one. We made another pass through the sweet spot , when he hooked up. This time the fish was a lot nicer, and he did a great job fighting the fish to the net. As I slid the net underneath the fish, I knew we were done. It was our second biggest fish of the day, a 7.5 lber! We were pumped and done for the day with our last fish in the live well.

After a nice easy ride in, we went to the scales with a Day 1 mission accomplished vibe. 32.58 lbs. had me in 15th or so place. Dustin Minke also had a solid day weighing 35lbs.

The Great Lakes always have a weather factor , and this was no exception.

the next 2 days were called off due to small craft advisory. The format was switched from a 3 day with a top ten cut, to a 2 day shootout.

3 days after my solid Day 1,we finally got to fish again. The weather called for calm and sunny.

I was excited to get back to the zone, and start casting again for those beautiful Walleyes. On top of the normal excitement , I had been suffering from fishing withdrawals since I hadn’t fished for 2 days !!!

I had a Co-Angler who was super excited to cast for the day , a guy who fishes a number of the smaller tournament trails in the area. It was going to be a good day, I could feel it.

As we started our first drift, I hooked up on a real nice one, after a long battle we landed a 8lber!  Just the start we needed, to confirm the big ones were still there , and that we still remembered how to cast for them! As the day rolled on , I had 3 in the live well and things started  getting slow. No problem I thought, time for a change of scenery. I started going through the secondary spots I hadn’t fished in days. After a couple hours of nothing, we landed on a very active school of 4.5 to 5 lbers. It was time to get our limit, so we boxed a couple of those fish. After another upgrade, I decided to head back to the primary area for one more big one.

I had the area isolated down to 2 really good feeding zones, where it seemed that the more time that had gone by, the higher the probability  there was an active fish present. We made a short pass through that zone, when My Co-Angler hooked up.  Another exciting battle that went on for what seemed like a long time, after we had seen the fish and knew we wanted to keep it. We slid the fish in the net, shook hands and said to each other “That was a great day”

We were done at 1pm, and got to enjoy a Cadillac style ride in courtesy of the Ranger 620FS and Evinrude G2 combo.

I ended up weighing in 31.89lbs and was sitting in 3rd or 4th place, with all the Day 1 leaders left to weigh. As more and more guys crossed the stage , the story became a norm. Tough day, slow bite, fish moved, etc. This had me staying high on the leader board with only a few guys left to weigh.

When the dust settled, I ended up in 7th place with 64.47lbs, and Dean Arnoldussen Took home 1st with a whopping 75lb. bag courtesy of trolling Flicker Minnows.

I had an amazing feeling of accomplishment , 2 top tens in a row. and a 7th Place finish for Angler of the Year. This had me hungry for more, and more importantly dissecting what made me successful in both of those tournaments .

Seeing my name above and below a lot of my childhood idols, is another gift from God.  I’ve had a great time so far, and love how those peers and competitors have welcomed me into the National Walleye Tour family. 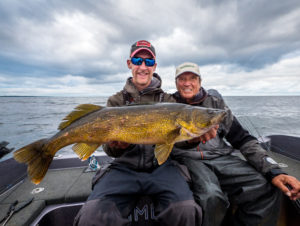 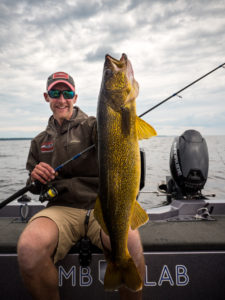